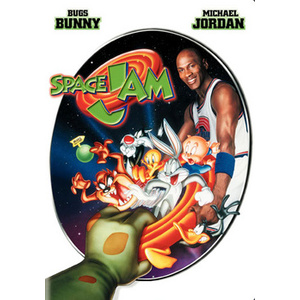 Bugs Bunny has gotten himself and his Looney Tunes cohorts into a jam by facing off against the Nerdlucks, a grouchy gang of tiny space creatures who land on Earth. The Nerdlucks, dispatched by their boss, the ruthless, belligerent Swackhammer, intend to kidnap and export Looney Tunes to Moron Mountain, Swackerhammer's failing theme park on the Nerdluck's boring planet. Bugs has challenged the small weak aliens to a fateful basketball tournament: if the Looney Tunes win, they'll remain on Earth, but if the aliens win, Bugs and company are headed into the hands of Swackhammer. Basketball's most spectacular star, Michael Jordan, has retired from the sport and begun to play baseball with limited success. But after the Looney Tunes capture Jordan from a golf course, transport him to Looney Tunes Land and explain, in true Looney Tunes style, their predicament, he agrees to join their team. Of course, what else can he do? They won't let him go home.
Home | Help | Terms & Conditions
© 2002-2022 Online Rewards