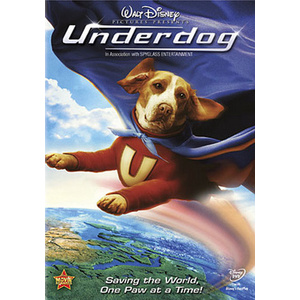 It's a bird, it's a plane, it's a frog...no, it's Disney's UNDERDOG -- a flying, talking canine caped crusader! After an accident in the mysterious lab of mad scientist Dr. Simon Barsinister, an ordinary beagle named Shoeshine finds himself with extraordinary powers... and the ability to talk! Armed with a fetching superhero costume, Underdog vows to protect the beleaguered citizens of Capital City and, in particular, a beautiful spaniel named Polly Purebred. When a diabolical plot by Barsinister and his overgrown henchman Cad threatens to destroy Capital City, only Underwear...(oops!)...Underdog can save the day. Based on the original hit animated series UNDERDOG -- your family will love watching the next great hero take a big bite out of crime.
Home | Help | Terms & Conditions
© 2002-2022 Online Rewards