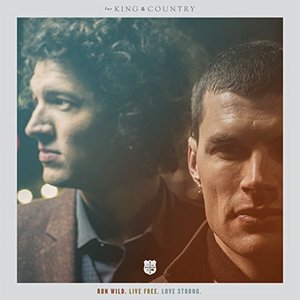 2014 second album from the Aussie duo called 'Australia's answer to Coldplay' by American Songwriter magazine. KING & COUNTRY were named 'Breakthrough Artist of the Year' at the first annual K-LOVE Fan Awards & made their 2012 late night TV debut on Jay Leno.' In 2012 they were named as one of Billboard's 17 acts to watch & were CCM's best-selling new artist. ET's 'The Insider' said the duo, 'make music that speaks directly to your heart' and have been 'gaining popularity in the alt-rock genre.' With the soaring melodies, driving rhythms and powerful, personal themes of RUN WILD. LIVE FREE. LOVE STRONG this release serves as the musical journal of the last three years of the brothers' lives, a life-changing time of growth, transition, revolution and revelation. In addition to their professional success, both men married and Luke became a father. But Luke also faced a life-threatening illness that forever altered his perspective. Featuring the hit single 'Fix My Eyes' and powerful songs 'It's Not Over Yet,' 'Without You,' and 'Run Wild' to name a few, 'RUN WILD. LIVE FREE. LOVE STRONG. Is a statement of reclaiming our birthright as humans,' Joel says, 'to live a life that is for others, and in that find what it truly means to run wild, live free and love strong.'