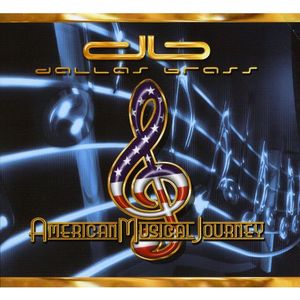 AMERICAN MUSICAL JOURNEY This CD includes selections from the Dallas Brass show by the same title. The music spans history from the time of George Washington to 1960's Rock. All pieces have been adapted for 5 brass and percussion. DALLAS BRASS Since it's founding in 1983 by Michael Levine, the Dallas Brass has become one of America's foremost musical ensembles. The group has established a unique blend of traditional brass instruments with a full complement of drums and percussion, which creates a performing entity of extraordinary range and musical challenges. The Dallas Brass repertoire includes classical masterpieces, Dixieland, swing, Broadway, Hollywood and patriotic music. According to Mr. Levine, 'a Dallas Brass concert is intended for the entire family. Our ideal audience has a range in ages from 5 to 95. Our goal is to entertain and enrich by playing great music, while showing our audience how much we enjoy what we do.' In addition to their solo engagements, the Dallas Brass appears with symphony orchestras nationwide. Symphonic credits include the Cincinnati Pops conducted by Erich Kunzel, New York Pops conducted by Skitch Henderson, and the Philly Pops conducted by Peter Nero. The Dallas Brass has performed at Carnegie Hall, the John F. Kennedy Center in Washington, DC, and has toured overseas to Europe and the Far East. They have shared the stage with the late Bob Hope, have performed for Presidents Gerald Ford and George H. W. Bush, have appeared on the CBS Early Show, and their music has been used numerous times on the television show, The Young & The Restless. The Dallas Brass has a strong dedication to working with young musicians, going into schools to present clinics and workshops, and frequently inviting student musicians to perform a selection with the ensemble on public concerts.