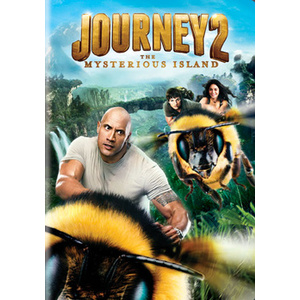 The family adventure "Journey 2: The Mysterious Island" begins when seventeen-year-old Sean Anderson (Josh Hutcherson) receives a coded distress signal from a mysterious island where no island should exist. Unable to stop him from tracking the signal to its source, Sean's new stepfather, Hank (Dwayne Johnson), joins the quest that will take them first to the South Pacific, and then to a place few people have ever seen. Or lived to tell about. It's a place of stunning beauty, strange and threatening life forms, volcanoes, mountains of gold and more than one astonishing secret. Together with Gabato (Luis Guzman), the only helicopter pilot willing to risk the trip, and Gabato's beautiful, strong-willed daughter Kailani (Vanessa Hudgens), they set out to find the island, rescue its lone human inhabitant and escape before seismic shockwaves force the island underwater and bury its treasures forever, in this follow-up to the 2008 worldwide hit "Journey to the Center of the Earth." "Journey 2: The Mysterious Island" also stars Michael Caine as Sean's grandfather, Alexander, the stranded traveler they're seeking, and Kristin Davis as Sean's mother, Liz.
Home | Help | Terms & Conditions
© 2002-2021 Online Rewards